Meet two Sketchy students who have used the Sketchy workbooks for their pre-clinical courses and their board exams.

We have a special edition of our Sketchy Spotlight series this week. We connected with two Sketchy users who had previously used their Sketchy workbook to help them study, review for Step exams and pass their boards.

You may recognize Brent Hill from a previous Sketchy Spotlight. He’s a non-traditional student, who absolutely loves utilizing a pen and paper to take notes while watching Sketchy lessons. He bought all three Sketchy workbooks for Micro, Pharm, and Path to use alongside his Sketchy subscription to fully immerse himself in the Sketchy universe. Even after passing his classes, he’s still using the workbook to review for Step 1.

Meet Maleeha Basham, a PG2 Internal Medicine who started using Sketchy as a MS4 and still uses it to this day. She found Sketchy when she was studying for Step 2 and bought both the Micro and Path workbook. She loves the accessibility in being able to quickly flip through her notes and currently keeps her scanned workbook pages on her iPad.

*Interview has been edited for clarity

Q: What do you love about the Sketchy workbooks?

Brent: My favorite was that I could have something that I could pretty much take anywhere with me. Sometimes it's not as convenient to watch a video and everybody listens to what you're watching. I like to sit around my wife and she doesn't necessarily want to hear about some parasitic types of things, wall types of obstructions or cysts, but you can still have your workbook there and look at the information.

Q: How did you use your Sketchy workbook? 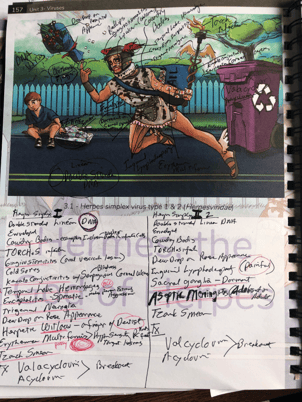 Brent: Since I had the full subscription, my tutor and I would watch the lesson and then walk through each step of the workbook. The tutor would then give me the really high yield information. There's gotta be some extra learning when you're actually physically writing something down, as opposed to just passively listening and watching the videos.

Maleeha: I got both the microbiology and the pharmacology. I would decide to study five bugs that day or five viruses or I'm going to do antipsychotics today. I would just start listening to Sketchy from the videos and start writing down what I was listening to in my workbook. I would then use First Aid and UWorld to see if there was additional information that I needed to add.

Q: Do you still use your workbooks?

Brent: Yeah, I was using it yesterday. Going back through, I can see where I wrote things in black or highlighted in red, or put little stars or asterisks. It's a great resource when you write it out yourself.

Maleeha: I still have my workbooks, they’re at home on my shelf. I scanned my workbook and all my notes into a PDF. Now I carry it around on my iPad. It makes it a little easier than carrying around the hard copies.

Q: What tips have you learned with your workbook? 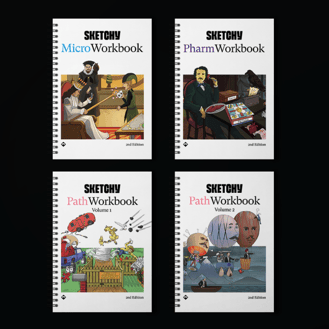 Brent: On the workbook, it has the numbers on the right, but on the original photos, it didn't have the numbers. I went back through and wrote the numbers on the pictures so that I could quickly look at them. That's an option, that's with the subscription already, but just put it on my workbook so that if I'm not watching the video, it's a quicker reference for me.

Maleeha: A tip I would say would be not to write too much. Assess what is most important to capture in your notebook and stick to that. You want to be able to easily review your notes without being overwhelmed with scribbles all over the pages.

Get your workbook today!

Why Is Sketchy Micro and Pharm So Effective?

Sketchy is backed by science! The Sketchy Method utilizes a combination of elaborative encoding and visual memory techniques to optimize learning.

Sketchy workbooks are back in stock! These workbooks are the perfect companions to any SketchyMedical subscription for Sketchy Micro, Pharm, and Path.