Sketchy workbooks are back in stock! These workbooks are the perfect companions to any SketchyMedical subscription for Sketchy Micro, Pharm, and Path.

If you’ve found your way to the Sketchy Merch Store any time in the past year or so, you’ve probably seen listings for the Companion Workbooks for Sketchy’s Micro, Pharm, and Path courses. And those listings all said “SOLD OUT”...

In gearing up for the new school year, we have revisited, updated, and improved our Sketchy workbooks. In the new editions, the lessons and course organization match what you see in the product and we’ve updated the art where necessary, we have crossed all our “t”s and dotted our “i”s, and the books’ design has been updated to be that much easier on the eyes. 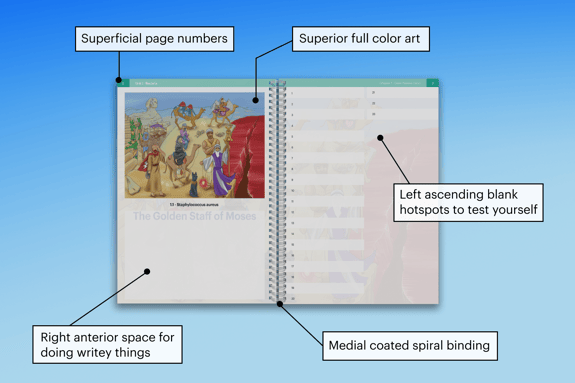 The workbooks have a two-page spread for every lesson in their respective course, with a layout like so.

The Sketchy workbooks are spiral bound and printed on heavy-duty paper that picks up pencils, pens, and Sharpie ink like a charm. You’ll be scribbling all your notes, high-yield information, and might even find yourself doodling some of the Sketchy characters in the margins.

If you’re a med student who enjoys having a pen and paper as your preferred note taking method, then this Sketchy workbook is for you. Depending on how you use your Sketchy subscription alongside your classes, that will dictate how you also use your workbook. You can watch the lessons that correspond with your class syllabus and fill out your notebook as you go. If you're feeling ambitious, you do the work prior to starting the course to get a jumpstart on the material.

Either way, we recommend giving the lesson a watch through to understand the gist and then jumping into note taking. As you watch, you can write notes down underneath the full color sketch. Jot down high yield information or questions that might arise. On the right hand side of the two page spread, you have numbered space to write all the hotspots and any other pertinent information that may relate to those symbols. We even suggest numbering the hotspots on the image as a way to quiz yourself. Using the spiral bound, it is easy to look at one side and quiz yourself on each hotspot. It’s like your very own hard copy review card.

After you’ve done all the work in your Sketchy notebook, bring it to your class! Not only will you be able to show off how fun your notebook is filled with cartoon artwork, but you can add additional information that you learn in class so you can have all your notes in one spot. Even after you’ve finished the course, hang on to your Sketchy workbook because you’ll need it to review for Step 1. You will find yourself reviewing all the notes you took down for each sketch.

However you decide to use your new Sketchy workbook, remember that it doesn’t really… work… without a Sketchy subscription—it’s a supplemental addition to your Sketchy learning experience. If you don’t already have a Sketchy subscription, we recommend getting the 12 month or more subscription so you can spend your entire school year immersed in the Sketchy world. With SketchyMedical you can access all pre-clinical and clinical medical courses, including Sketchy Micro, Sketchy Pharm, and Sketchy Path.

Have we convinced you yet that you need a Sketchy workbook? This is a limited printing, so pick yours up before they’re gone (for the moment they’re only shipping in the US).

Why Is Sketchy Micro and Pharm So Effective?

Sketchy is backed by science! The Sketchy Method utilizes a combination of elaborative encoding and visual memory techniques to optimize learning.

Meet two Sketchy students who have used the Sketchy workbooks for their pre-clinical courses and their board exams.