How to Study for MCAT Physics with Sketchy MCAT

MCAT Physics involves a lot of memorization, but Sketchy MCAT is here to make all that physics studying a breeze.

If you feel a stroke of terror walking into physics class, you’re not alone. There are few things spookier than invisible forces at work. You know—forces like electricity and magnetism (or as we say on Halloween, ghosts).

The good news: self-playing pianos are definitely fake. One hundred percent fake. Also good news: at Sketchy we’re all about taking the scare out of physics to help you ace this section on the MCAT.

It might seem surprising that an entire section of the admissions test for medical school is about physics. Why not leave Newton to his apple tree and just expand the biology section for a more in-depth look at key topics like anatomy and physiology? Well…it turns out that physiology is just a slightly longer word for, uh, physics. Cells separate charges across their membranes kinda like batteries, neurons use electrical currents, and blood follows the laws of fluid dynamics. Of course there are also lung pressures and gas equations to understand respiration. Oh and an MRI involves magnets and x-rays use radiation. So yeah, turns out physics is kinda important to the entire human body / medicine situation. Even more so if you’re Frankenstein.

Don’t Get Scared, Get Sketchy

Frankenstein may know a thing or two about physics, but he’s got nothing on Sketchy. We take complex topics like Optics, Periodic Motion, and Fluids and turn them into bite-sized candy bars—I mean videos—pairing concepts and equations with symbols that will stick with you and help you study. Then we place those symbols in visual spaces to make them extra sticky. Sticky as last year’s candy corn. Not so frightening after all, right? Though we can’t promise our sketches aren’t haunted…with memorable symbols.

Electricity and Magnetism—Frightening Forces on the MCAT

So this Halloween save your teeth, unplug your doorbell, and check out our unit on Electricity and Magnetism. It’s got black cats, bats, witches and wizards, forests, full moons, and monsters—quite the spooky cast to guide you through topics like Coulomb’s law, conductivity and resistance, and capacitance. You definitely don’t want to miss these key details for the spookiest day of the year—MCAT test day.

A Monster of a Test

But let’s forget about that uh terrifying thought for a minute. Go ahead and wash off that vampire face paint and hang up that daring silk cape, because with Sketchy you can feel confident facing all kinds of harrowing challenges on the MCAT physics section—like Magnetic Fields or staring down this two-headed dragon.

Though it might not look like it, this fellow means well. He just wants you to remember how to calculate the magnetic field from a straight current-carrying wire. Really, that’s all. Promise.  For more on the relationship between current and magnetic fields, head on over to this dragon’s lair (just don’t touch that treasure).

It Was a Dark and Stormy Night…

Of course, on Halloween there’s always the potential for some really scary stuff—like that one house in the neighborhood that hands out toothpaste instead of candy. Or like in this sketch about electrostatic potential energy. This voltage creature looks like it’s up to no good. You can tell because it makes more than one appearance around Sketchy—often getting into trouble. We use recurring symbols like this to help you store away super important information as you move from lesson to lesson and across units as you’re studying for the MCAT. 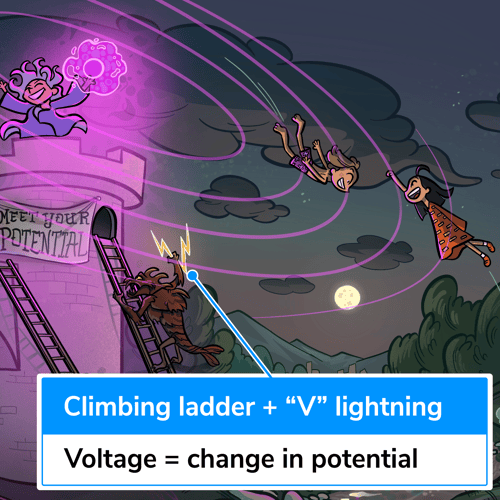 Fortunately the good forces around here seem to be pretty strong–definitely strong enough to help you recall how charges move through magnetic fields. 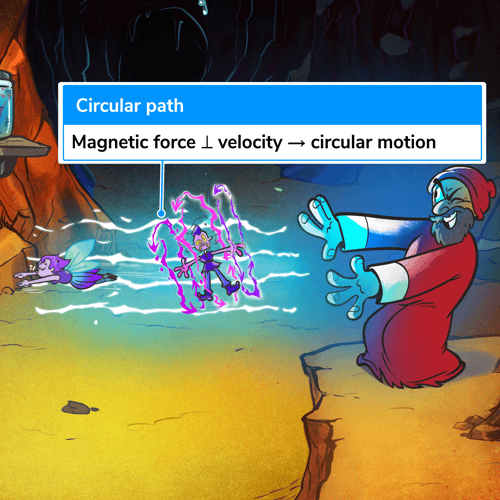 Check out our full MCAT physics lesson on Magnetic Forces to conjure some more magnetic magic.

As you can see, we weren’t joking about that spooky cast. But if all the monsters and supernatural forces aren’t frightening enough for you, take a ride into the depths of Sketchy’s mines. Bring a flashlight though because it gets dark; you definitely don’t want to be surprised by the Worcs.

They don’t take their…uh work, lightly. But spend some time with them and you’ll know potential and kinetic energy forward and backward. Get it—forward and backward—conservation of energy…oof. Really though, forget that terrifying pun and check out Sketchy’s Work and Energy unit to learn about Kinetic and Potential Energy and Conservative and Nonconservative forces. Just look at this friendly(?) creature symbolizing which forces are conservative.

Okay okay we know what you’re thinking. This is a lot of stuff to remember. Like, a lot. And we haven’t even talked about the other MCAT sections yet. Yikes! But not to worry, because at Sketchy we know what you’re going through. We’ve been there. Halloween jokes aside, taking the MCAT can be a bit frightening. And while studying for it, you might feel kinda like a zombie. That’s why we’ve built an entire MCAT course just for you. It’s a course full of jokes and art and animations, along with unforgettable symbols, wily creatures, and magical forces.

So go ahead and give Sketchy a try. You might just find that physics is kinda… fun? Now that’s spooky.

How to Remember Everything About Insulin with Sketchy MCAT

The endocrine system is a high-yield topic on the MCAT. Sketchy MCAT’s has the MCAT prep to prepare you. Let’s start with this candy-filled Insulin...

When choosing an MCAT test date, there are many factors to consider if you should choose the MCAT off cycle or in cycle.

How to Study for MCAT Organic Chemistry with Sketchy MCAT