How to Study for MCAT Organic Chemistry with Sketchy MCAT

We’ll be the first to admit it: Organic Chemistry can be scary. Like, serial-killer-documentary level scary. Now, a bit of looming terror may be fitting for Spooky Season, but your MCAT prep doesn’t have to be that way. Love it or hate it (probably hate it), aceing Orgo is key to getting your dream score. So, you’re gonna need to brush up. At Sketchy, we take the spooky out of studying Orgo to make it approachable, memorable, and even fun. Don’t believe us? Let’s take a look at some of our sketches that can help take the “oh no” out of Orgo.

In our experience, the only part of college more terrifying than memorizing the IUPAC rules for naming molecules was the freshman dorms. So, this dorm room in disarray was a natural setting for our lesson on functional group priority under IUPAC conventions. This sketch is your goto for determining which functional groups get added to a molecule's names as prefixes and which group is added to the end of the name as the suffix. See, as you work your way from top to bottom of this dorm room, you’ll learn how to arrange common functional groups from lowest to highest priority when naming a molecule. The “Halo” TP on the floor will help you remember the lowly halogens, while the cardboard box on the top of the bookshelf is a reminder of the king of the functional groups: carboxylic acids. Plus, in between we’ve some AmiNo protein powder for amines, a ketone key, and roommate Al hiding to symbolize aldehydes. Oh, and don’t miss those “cOH’s Light” cans right in the middle. They symbolize alcohol groups, and you’ll find them ALL over our Sketchy University in our Orgo course. Just don’t let the RA see.

Maybe it’s stereochemistry that haunts your dreams…or soggy dining hall tacos. Eitherway, a visit to SketchyU’s dining hall will have R and S molecules sorted out in no time. To help you remember to number the atoms bonded to a molecule’s stereocenter from heaviest to lightest, these wise students always follow the paramount rule of making a structurally-sound taco: the heaviest toppings go on the tortilla first. That means meat first, then guac, then pico de gallo, and lastly a generous sprinkling of cilantro. Plus, these orderly students always follow the Right or Sleft arrow as they make their way from topping 1 to 2 to 3. And, yeah, spelling is not a strong suit at SketchyU, but those arrows do serve as a reminder to draw an arrow from functional groups 1 to 2 to 3 to see if that arrow goes right for R or left for S. And there it is! You’ve determined if a molecule is an R or S isomer and picked up some tips and tricks for next taco tuesday. 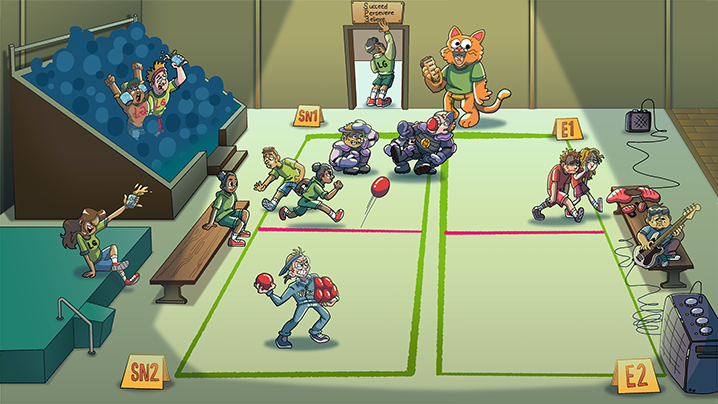 SN1…SN2….E1…E2? Can’t keep all these reactions straight? Neither could we. Fear not though, the players being substituted and eliminated on each court of SketchyU’s dodgeball tournament will help you nail down the mechanisms of substitution and elimination reactions. The two-stepped bleachers by courts “SN1” and “E1” are a reminder that these reactions occur in two steps. Because, if E1 had one step, well, that’d just be too easy. Plus, you definitely won’t forget this unenthused carb-devouring cat mascot. He symbolizes none other than a carbocation, and his location right between courts “SN1” and “E1” will help you remember that those two-step reactions involve the formation of a carbocation intermediate.

There’s plenty more information depicted on these courts, like the type of nucleophile or base needed for each reaction to occur, but the real party is in the stands. That crew in the “LG” garb throwing back a cOH’s Light…or ten…symbolizes that alcohols are often the leaving group in these reactions. And, while they may not remember every play of the tournament, or even that they were there at all, we promise you won’t be able to get this lesson unstuck from your memory.

So, there you have it: some of the trickiest topics in organic chemistry boiled down to a treat. Check out all our Orgo lessons to review topics like redox reactions, reactions involving alcohols, NMR, and chromatography. We promise to take the fear out of MCAT prep so you can save your terror this Spooky Season for haunted houses and horror movie marathons.

How to Study for MCAT Physics with Sketchy MCAT

MCAT Physics involves a lot of memorization, but Sketchy MCAT is here to make all that physics studying a breeze.

When choosing an MCAT test date, there are many factors to consider if you should choose the MCAT off cycle or in cycle.

How to Remember Everything About Insulin with Sketchy MCAT

The endocrine system is a high-yield topic on the MCAT. Sketchy MCAT’s has the MCAT prep to prepare you. Let’s start with this candy-filled Insulin...