Welcome to our Sketchy Spotlight Series, where we share stories from the Sketchy community. This week, meet Brittany Bonds: Pre-med student at American University.

Brittany shares her remarkable and inspiring path to fulfilling her dream of a career in medicine. Learn how Sketchy supports her busy life as a student, wife, mother to 4 kids and active duty Air Force officer. 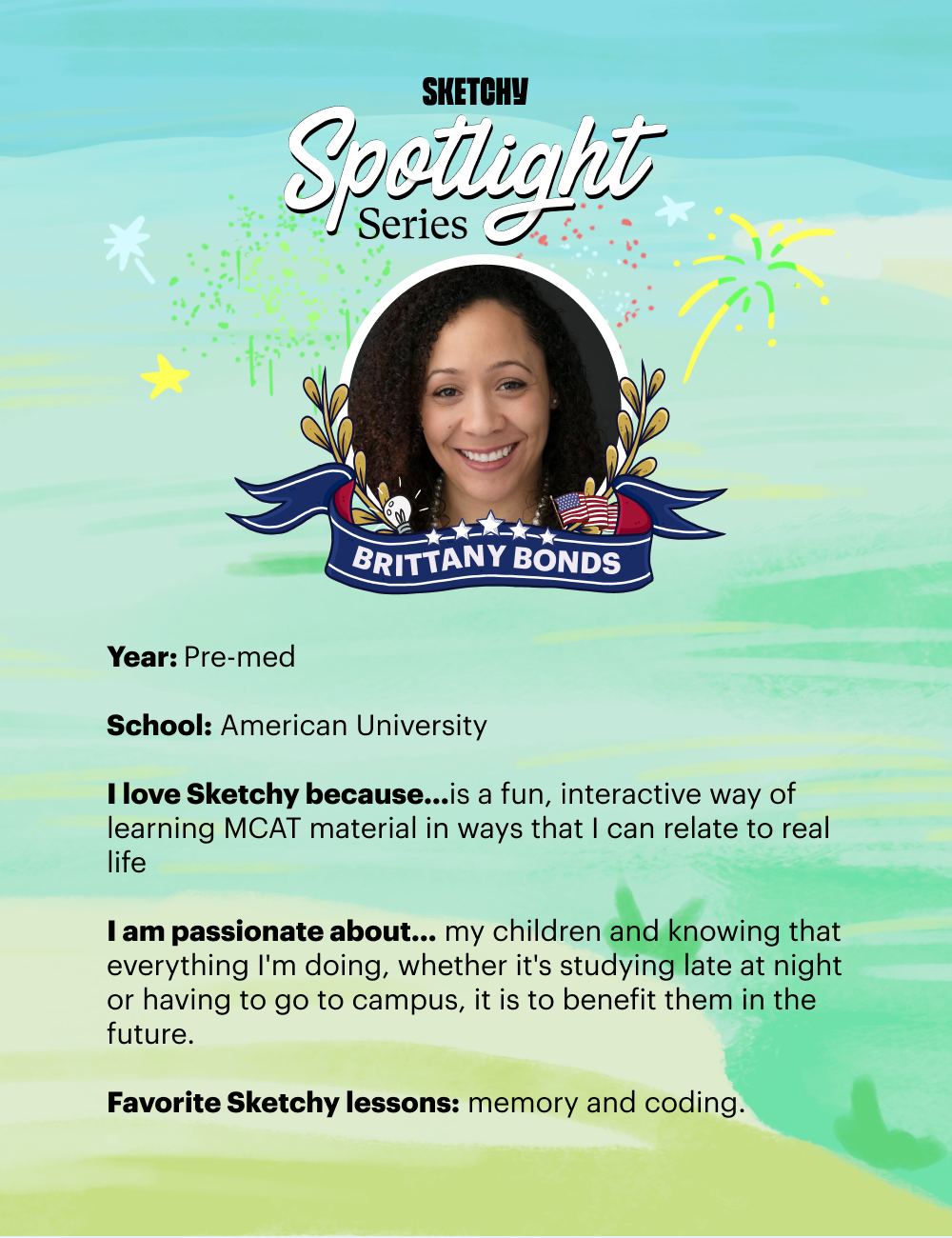 Q: How did you learn about Sketchy?

Brittany: I had heard about Sketchy from a couple of pre med groups that I was in, but I had never seen a Sketchy video. So, I attended a webinar that Blueprint did talking about the collaboration with Sketchy and I was sold. After seeing a little bit of a preview video and then seeing that they were partnering with a plan that I was already using to study MCAT, I was just like, this is it for me.

Q: What has your experience been like using Sketchy?

Brittany: Sketchy is truly a game changer.  How they explain the lessons can sometimes go further than how a professor may explain it in class. I'm always like, "Let me just go see if this is on Sketchy. Oh, let me see if there's a video on bio-signaling."  I'm going to remember these kids playing in the park with the fence opening and that being a voltage gated ion channel. I'm going to remember that more than a Macmillan slide in class. Absolutely.

Q: How would you describe Sketchy to a new student?

Brittany: Sketchy is a fun, interactive way of learning MCAT material in ways that I can relate to real life and things I'm already familiar with. I mean, even if you are not studying for the MCAT, if you are in any sort of science class, Sketchy can help you period. That's really the bottom line.

Q: What advice would you give your pre-med self?

Brittany: I would say don't give up. There is a place for you in medicine. Do not doubt that because I would say over the last two years, there has been a lot of attention in especially diversity, equity and inclusion, and that is ever important in the field of medicine. It's important for patients to see doctors that look like them. If I can do it with all the things that I have going on, being an Airman, being a wife, being a mother, being a pre med, anybody can do it.

Q: Is there anything in your experience of being in the armed forces that has helped in your journey of becoming a doctor?

Brittany: So, medicine is something that has been a lifelong dream of mine, and it's something that's very special to me, but I never saw myself actually being able to become a doctor, whether that be from self doubt or what have you. But, once I joined the Air Force and I started to get exposure just to life outside of where I grew up and more opportunities, and started interacting more with doctors, PAs and nurses, that's where I kind of built my confidence that I could really do this.

Q: What does Memorial Day mean to you?

Brittany: Memorial Day is a time to honor soldiers who have paid the ultimate sacrifice. And if there was one thing that I could say as a fellow Airman or fellow military member it’s thank you. Because, there's a reason for your service. This country needs you. And it's an honor to serve with you.

Welcome to our Sketchy Spotlight Series, where we share stories from the Sketchy community. This week, meet Brent Hill: MS2 student at Saint James...

Welcome to our Sketchy Spotlight Series, where we share stories from the Sketchy community. This week, meet Bianca Yugar: MS2 student at Rutgers New...

Welcome to our Sketchy Spotlight Series, where we share stories from the Sketchy community. This week, meet Shivi Dua: Pre-med student at Barnard...