How to Remember Tough MCAT Topics With Memory Palaces

Despite all our efforts (looking at you, ginkgo), human brains aren’t so great at remembering “facts” as they’re traditionally presented. Most knowledge in school tends to be given as verbal information: a lecture, a textbook, a slide, your notes. We have verbal memories, of course, but they never work quite as well as we’d like them to – we’ve all had the mortifying experience of forgetting information at the worst possible moment.

So, our brains aren’t wired for long-term storage and retrieval of detailed verbal information, which makes the premed and MCAT journey an uphill climb. But our brains are wired for long-term, high-fidelity memories of visual and spatial information – probably thanks to our long-ago lizard ancestors who needed to remember where food was and what it looked like, but weren’t quite ready for Shakespeare yet. This has been proven many times over with scientific studies and with firsthand experience by any student who has had a concept “click” by drawing a picture or used visual learning tools to succeed.

But enough talk—let’s illustrate (...) this with an example. Consider the following four facts:

Whether or not you’ve memorized these names before, it’s clear there are some arbitrary elements here. For example, there’s nothing intrinsic to a five-carbon sugar that makes it called a furanose – that’s just the name we have for it. The same applies to the other facts: they just are what they are, and it’s up to you to remember them. And if you keep the information verbal, that’s about as far as it goes.

But what if we presented those facts like this instead? 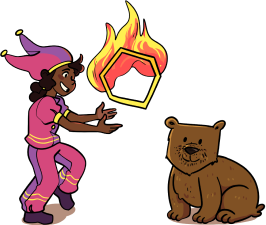 Six-carbon sugars, or pyranoses, are symbolized by a flaming hexagonal hoop
“pyranose” → “pyro-” like “fire”

Five-carbon sugars, or furanoses, are symbolized by a pentagon-headed bear with a cute furry nose
“furanose” → “furry nose” bear 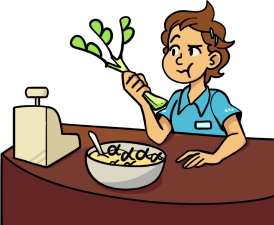 Digestible starch, made of α-glucose, is symbolized by a bowl of α-shaped noodles, a starchy and very digestible food

Indigestible cellulose, made of ꞵ-glucose, is symbolized by celery, a fibrous and tough-to-digest food, with ꞵ-shaped leaves

These are the kinds of lessons we create at Sketchy. (And what you see above is just part of one hilarious lesson—wait till you see the no-pants jesters!) We present complex facts as visual symbols, and then tell you an engaging story that makes them leap off the screen and into your brain, never to leave again. This affinity for visual information is the backbone of the memory palace technique, which is used by memory champions to memorize decks of cards in less than 25 seconds, and by thousands of medical and premedical students every year, via Sketchy’s medical and MCAT programs, to organize the tidal wave of material required of today’s aspiring physicians.

There’s so much more we can say about memory palaces, but the best way to learn is to dive in! You can make a free account with Sketchy to see just how it all works in practice. And in the meantime, if the memory of freezing up during your test is a little too real for you, you’ll love the companion post from our friends at Blueprint MCAT Prep with proven advice on how to handle test anxiety.

In fact, Sketchy has a special partnership with Blueprint MCAT Prep, letting you bundle a Sketchy subscription with Blueprint’s acclaimed full-length MCAT exams for a special discounted price. If you’re interested in Sketchy and you’re still looking for more full-length practice (and who isn’t?), check it out!

Ever wanted to peek behind the Sketchy curtain? Now’s your chance! Meet the brains that make our Med, MCAT, PA, and Pharm programs fun, relevant, and...

Welcome to our Sketchy Spotlight Series, where we share stories from the Sketchy community. This week, meet Brittany Bonds: Pre-med student at...

Welcome to our Sketchy Spotlight Series, where we share stories from the Sketchy community. This week, meet Brent Hill: MS2 student at Saint James...